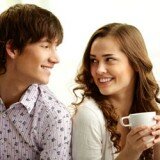 Sometimes meeting guys in college can be overwhelming. There are far too many boys to choose from (as if that could be a problem!) and so many catty girls to compete with. Check out these flirting tips for connecting with your crush, and making him want more:

This has got to be the number one rule in the official Book of Flirting. Your eyes can be one of your most useful tools when trying to get a guys attention. Make eye contact across the party and hold his gaze for just a few seconds. However, there is a fine line between a sexy gaze and stalker-status. Don’t cross into creeper territory!

2. Use your hair to your advantage

Your hair is one of those things that you worry about every minute of every day, but guys couldn’t care less about. They usually don’t even notice a new haircut, unless it’s something drastic like pink hair or a shaved head. However, you can still use your hair to your advantage. Spray a bit of your favorite perfume in your locks or use a really nice-smelling shampoo and then casually flip your long hair when you’re talking to your cutie. The pretty smell of your luscious locks will draw him in closer. This rule goes for perfume as well. But don’t do too much hair flipping or he’ll think you are having some kind of nervous spasm.

Another coy way to flirt using your locks is by tucking a strand of hair behind your ear. This is a shyer move, but accompanied by a smile, you’ll get the reaction that you want.

If you and the cutie you’re after are chatting it up and he tells a joke, let out a giggle! You will flatter him while letting him know that you have a sense of humor. Also, it’s been proven that guys love a girl that laughs at their jokes. Tease him a little to keep him on his toes. Guys like a little banter!

There is no sweeter sound than the sound of one’s own name. When you use a guy’s name after you just meet him, he’ll know that you cared enough to take note of it. It gives the conversation a personal touch and makes you seem more genuine. Also, if you are interacting with a lot of different people, repeating the name of someone out loud will help you to remember it. Just don’t use it too much – again, too creepy!

No, I do not mean grind all up on him (no matter how hot he is). Move closer to him when you’re having a conversation. This usually isn’t too obvious when you’re in a crowded party or bar. You don’t want to be a close-talker, but you do want to lean in, especially when answering a question. Also, put some of your weight on one foot when standing and talking. Having both feet planted firmly on the ground gives you a stand-offish vibe. Stand casually and after a while when you are comfortable, tough his arm lightly when laughing at a joke. I’m predicting instant fireworks.

At the end of a good conversation when your friend is pulling you away to go dance with her, you want to make sure this cutie remembers you. If the conversation went particularly well and you are feeling confident, grab his hand and squeeze it while saying goodbye. Then walk away with you friend but turn and flash a flirty smile at him before you disappear from his view. He’ll be disappointed to see you go and you might see him later in the night fighting his way through the crowd to talk to you again. Trés romantic.

Alright ladies, your training is now complete. Go forth into the crowds of boys and put these skills to the test. May the odds be ever in your favor.

My name is Rachel Crocetti and I'm currently a sophomore at Hofstra University studying Journalism and Photography. I am one of the campus correspondents for Hofstra's chapter of Her Campus and also a web intern at Cosmopolitan Magazine. I'm very excited to continue writing about college experiences while I'm personally "living the college life." I love writing, photography, tea, yoga, and exploring NYC with friends. I'm also obsessed with Twitter and occasionally tweet some quirky things...follow me @rcrocetti!
More articles by Rachel Crocetti »