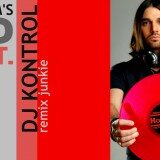 Rostam’s 30 is LTCL Magazine’s new initiative led by DJ Rostam to introduce new hot artists to our college readers. Simply put, we interview these artists with 30 questions and provide their music links for you to download and listen to daily. Let us know what you think about DJ Kontrol with a comment below!

Based in Atlanta, GA, the city many refer to as the new Motown for music, DJ Kontrol sets himself apart from the rest with his experience as both a DJ & Producer. Kontrol has been at the forefront of the Mash-Up movement blending Hip-Hop & Dance music for nearly a decade. His sought after Remixes have been featured on all the major DJ sites including Beatport, CrooklynClan.net, YourRemix.com, StrictlyHits.com and more.

As a DJ, Kontrol spins an open-format of music featuring classics from every decade in addition to many of his signature Remixes. With more than 10 years of nightclub experience, this DJ has what it takes to satisfy a diverse room of clubgoers. His vast knowledge of music & knack for incorporating the craziest Remixes into his sets ensure a good time whenever he is in ‘Kontrol’ of the party! For more on DJ Kontrol, check out his official Website, Facebook and Twitter.