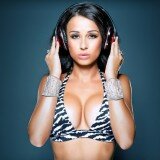 Rostam’s 30 is LTCL Magazine’s new initiative led by DJ Rostam to introduce new hot artists to our college readers. Simply put, we interview these artists with 30 questions and provide their music links for you to download and listen to daily. Let us know what you think about Juicy M with a comment below!

What a sexy chica! Originally from Kiev, Ukraine, we’re stepping a bit outside of the box to introduce you Juicy M, our fist  Rostam’s 30 featured female DJ on LTCL Magazine.

Juicy M is one of the most successful DJs in Europe. Since 2006 she performed in more than 200 venues in more than 50 countries all over the world and this is just a beginning . There are only high profile clubs & events like 1Oak (NYC, USA), M1NT (Shanghai), Pacha (Egypt), X2 (Jakarta), Horizon Lounge (Dubai), The Rooftop (Hanoi), Trilogy (Mumbai), Wall (Miami) and many more. In 2011 Juicy played at official Backstreet Boys VIP parties in Saigon & Hanoi during their tour in Vietnam.

DJ Juicy M began her career in 2006 and during the first year she became resident DJ in the best Ukrainian Clubs at that time like Orangerea Supper Club & Patipa Club in Kiev and Matrix Club in Yalta. Also Juicy signed with Fashion TV Ukraine and was a headliner of the Ukrainian FTV tour in 2007.

Behind all the sexiness, there is an ultimate scratch technique that is really challenging, so big props. It really is not all about how flashy you look on the spot. Juicy M is always taking part in scratch and technique contests like DMC World Eliminations in Ukraine and World Technical DJ Championship in Dubai. She received the “Best DJane Of The Year” at ProDJ Awards in 2010.

Juicy M is a DJ with a perfect ability to communicate with the crowd. She precisely knows what party people want and she always creates the right mood and just blows the party up! So be sure to check her out on her official Website, Twitter, Facebook and YouTube.