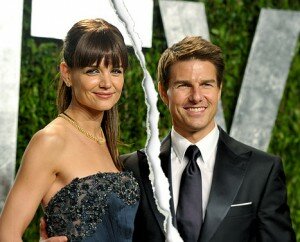 In the latest celebrity news, Tom Cruise and Katie Holmes are getting a divorce.

Let me remind you of the courtship lasting all of two months:

I hate to say it, but is anyone actually surprised this marriage is ending? I am not. I am however, surprised that the marriage even made it over five years.

Hollywood is not the place “I dos” go to live happily ever after. But I’ll tell you what, the day I lose all faith in Hollywood couples is when I hear Will and Jada are over – yes, they’re the pedestal couple… for now.

Are you surprised this marriage is the latest to end in Hollywood? Let us know what you think by leaving a comment.

Amy Willsey
I'm a sophomore magazine journalism major and business minor at the University of Missouri. I came from the lovely Kansas City and am a die hard Royals and Chiefs fan. I enjoy long-distance runs, alliteration and I spend my free time finding the fraternities with the cutest puppies. Carry on, all you pretty people, carry on.
More articles by Amy Willsey »
0 comments »

"whoever wrote this is fantastic"
"I couldn't understand a freaking sentance you said.. learn grammer. Geez."
"Good point..."
"They may be rich, but still drink Bud Light.  No class.  "
"P.S. the royals almost never beat the chiefs when I see them at the sovereign center lo..."
"Royals? I'm from reading pa born and raised its good to see hometown pride from the int..."
"My wife said I’m too immature and if I don’t grow up it’s going to erect a barrie..."
"This is such a funny story. Not meaning to laugh at you, but I feel your pain. It's ins..."
"This is what lots of make up, a nose job, breast implants, not eating and exricing too ..."
"what the hell she look beautiful i want to look like her u know am cutest then her she ..."
Favorites
News
Entertainment
Funny
Videos
Your Mother Was Right About Tattoos
Kristen Stewart and Rupert Sanders: The Biggest Celeb Cheating Scandal?
How to Get Her Number Using Pokemon Pickup Lines
Video: Fan extremely upset with Kristen Stewart Cheating
More »
More »
More »
More »