Ode to Being Weird

I’m weird, and it’s okay too. But I didn’t get that until the last few years. While being different may not be better when you’re younger (read: kids are cruel), it IS actually a huge turn-on for most people after maturity hits (for some of you, that will never happen, sad, I know).

I’m writing this as a tribute to one of my favorite people currently alive – Lady GaGa, but moreso as a tribute to one of my favorite dead musicians – Amy Winehouse. Being a guy, from a small town in the middle of the country, it’s really not okay to be a big fan of a female singer. If you are, you’re gay! Now clearly that’s not the case much of the time (unless 1 of every 4-5 of your Facebook statuses is something along the lines of “It’s Britney Bitch!” in which case, you are probably gay, and in that same case, probably openly so, so there’s really no ambiguity going on there.) But guys are supposed to like rock, or rap, or country or whatever. But listening to a tatted-up chick with too much eyeliner and a beehive? Not kosher. (She’s Jewish, see what I did there?).

Liking Lady GaGa as a guy is weird too. You’re not supposed to like her music because it’s too simple. And she’s weird! And she wears meat dresses! And she’s a gay icon! Here’s the thing: it’s fucking okay to like/appreciate/be a fan of somebody as long as there really is a good reason.

Why am I such a huge Lady GaGa fan? Because I legitimately believe that she is a musical genius. I think that she is better at what she does (pop music, fashion) than everyone else in that category. And I love winning and winners, and Lady GaGa is one. Not only is she weird, she’s WEIRDER THAN EVERYONE ELSE! Even Nicki Minaj (who rips GaGa’s style so hard). I could go on for hours analyzing Lady GaGa’s songs, videos, and outfits, but I’ll save that for another day. All I can say is that much of her incredible fashion applies to men too: especially her choices in sunglasses.

Before Lady GaGa, very few people knew about Versace 676 Sunglasses. Now, they are one of the most sought after high-fashion products. Finding real ones range from $750-$1000 because not only are they vintage 1990’s Versace, but because of GaGa’s fashion influence.

GaGa takes sunglasses to the next level…would you rather have this: Or VIDEO sunglasses that are created out of 2 iPod screens. POP MUSIC WILL NEVER BE LOW BROW.

And my personal favorite:

Those are sunglasses made out of a CHAIN LINK FUCKING FENCE. Is it weird? Yeah! Is it one of the most creative things in recent years? Absolutely.

Here’s why I’m talking about GaGa. In a PopEater article, Lady GaGa said that Amy Winehouse is the reason that “weird girls” have a place in pop music.

“I will always have a deep love for Amy Winehouse…because of Amy, very strange-looking girls like me go to prom with very good-looking guys…

She is a different kind of woman, I don’t believe what I do is very digestible, and somehow Amy Winehouse has the flu for pop music, and everybody got a little bit of the flu, and got over it and fell in love with Amy Winehouse, and now when the flu comes along, it’s not unbearable.”

So now, let’s get to why I love Amy Winehouse so much. I obviously first heard “Rehab,” which coincidentally enough, I didn’t like, and still don’t even have the original version on my iPod (I have the remix with the Jay-Z verse). But one thing about Rehab – she looked DAMN good in that video. 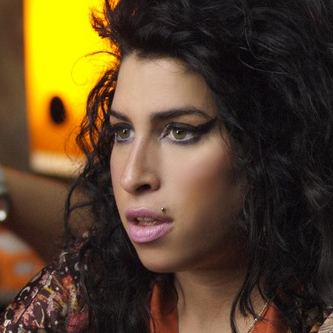 Please don’t even try to tell me you’re not attracted to her in this picture/still from the video. She is very sexy here.

So, due to my little crush on Amy, I researched some more of her music and came upon some of her other hits like “You Know I’m No Good” and “Back to Black.” Here’s what sets her apart – what she’s describing is HER LIFE, and it’s very, very real, and so unrealistic for a normal person, that it’s hard to fathom. That’s what drew me in. I will never be part of a miserable drug relationship, so I have no idea what one is like. BUT, movies, and songs about those are the most interesting because we’re lead to believe by media and people who do drugs, that drugs release your inner-most feelings and your first and original impulses. Maybe that’s why Amy’s music feels so raw and honest.

Many of her songs are about her on and off again boyfriend and eventually husband Blake Fielder-Civil.

Dude looks pretty good here with the slim cut suit and the skinny tie…I presume he’s at least half-sober at this point, or at least only on alcohol and/or weed. 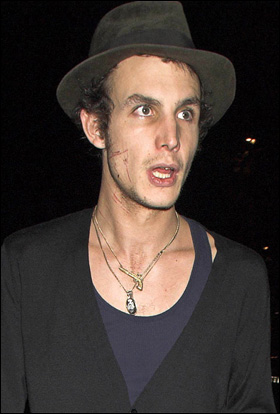 That, my friends, is a fucking junkie and essentially the man indirectly responsible for the death of one of the most talented and influential musicians of our generation.

Fielder-Civil told a British tabloid that he was the one who introduced her to crack-cocaine and heroin. What a fucking winner.

While it’s pretty standard for musicians to have mental issues (in Winehouse’s case: manic-depression), drug issues (again, with Amy it was originally marijuana, followed by cocaine, followed by crack and heroine thanks to Blake) and drinking issues (a reported roughly .40 BAC led to Amy’s death of alcohol poisoning), her’s were taken to excess by a drug-fueled relationship that included domestic violence (mostly she was violent toward him, and refuted claims that he hit her…but come on, does that guy look like he’s not capable of hitting a woman?)

There is a huge difference in her music when she met Blake, I submit a couple examples:

In her 2003 album Frank two of my favorite songs of hers, “Stronger Than Me” and “Fuck Me Pumps” show intelligent social criticism. Keep in mind, she was 19 to 20 when these songs were written.

“Stronger Than Me” is about her dating a guy 7 years her senior, who can’t keep his shit together in the relationship. She is mature and emotional when needed, while he is needy and acts like the woman of the relationship (according to her). There are no drugs involved, just her writing a song about the virtues of a good relationship versus one that has roles switched.

“Fuck Me Pumps” is her criticism of trashy 30 year old London women with fake breasts, real Gucci purses, and their hopeless merry-go-round of one night stands with footballers, even though they want to act like they don’t want that life. The song is actually hilarious, which is tough to do if you’re Eminem, let alone a 20 year old female singer.

In 2006, her album Frank dealt with issues of drugs, alcohol, and relationships, mainly her relationship with Blake. The best songs from that album (You Know I’m No Good, Back to Black, Rehab, Love is a Losing Game, Tears Dry on Their Own) are very dark.

“You Know I’m No Good” is about cheating on her current boyfriend, who she knows is bad for her, but she’s dependent on him. She feels guilty for cheating on him, but also guilty for being with him in the first place. The last verse is incredibly thematic…

Sweet reunion, Jamaica and Spain,
We’re like how we were again,
I’m in the tub, you on the seat,
Lick your lips as I soak my feet,
Then you notice little carpet burn,
My stomach drops and my guts churn,
You shrug and it’s the worst,
Who truly stuck the knife in first

First, she’s excited to be with him. Next, she is worried that he finds out she cheated by seeing her carpet burn, when she shrugs, she feels betrayed because she wants him to care that she cheated on him to fulfill her guilt.

“Back to Black” is supposedly about her reaction to Blake’s on-and-off again relationship with his ex (who he cheated on with Amy).

“Tears Dry on Their Own” is an amazing song. In one of the lyrics, Amy reflects that her self-image may be shattered due to being the one that Blake cheated with.

Even if I stop wanting you/A perspective pushes through

I’ll be some next man’s OTHER woman soon

She truly was a one of a kind talent ruined by having poor taste in men. So here’s to Amy Winehouse, a misguided soul, and one of my favorite musicians of all-time.

Are you a passionate about Games, Music, Movies, or Books?

If your answer is yes, and you’re also interested in an internship writing for LTCL, contact us and let us know!
Help other students become more aware of what is out there!

Tweet Tweet Surprise Surprise, so you Rub Your Eyes… First week on YouTuBe and 5 MILLION hits later Marquese Scott hits viral stardom and continues to record sick videos, one after the other. Flawless moves, incredible...
by LTCL
0
Full Story »
Music

Tweet Tweet he Sounds of College hese are the top college songs this fall. Listen to these tunes that make up The Sounds of College… These are in no particular order. Sit back and let these fresh tunes do their thing. Lis...
by Armani Alejandro
1
Full Story »

"This is pretty on par with what I do.. lol"
"#63... lol"
"hahaha.... "Does anyone else scream when the can of biscuits pops?".. Thought it was on..."
"weed doesnt get you hot girls, just people who smoke are cooler and more down to earth"
"I appreciate the comments and feedback, but honestly I think you guys are missing the p..."
"Agree with James. Wow what a load of garbage. I don't get why you would profess to be s..."
"James - please specify what you found troubling with this and I can explain, and/or cla..."
"wow, you are pretty fucking stupid. Hopefully you grow up a little soon, seeing as you ..."
For You
Inside His Head
Inside Her Head
Guys Fashion
Ladies Fashion
How to have a Boyfriend and Guy Friends
Think Like A Man: One Night Stand
Truth: He’s Just Not That Into You
9 Signs She Likes You
When to End Your Relationship
How To: Introduce New Boyfriend to Dad
The Ultimate Guide: College Style for Men
Five Essentials for a Sophisticated Wardrobe
Eight Lingerie Picks to Sex up Your V-Day.
Trendy Spring Semester Looks
Seven Items to Steal From Your Boyfriend.
More »
More »
More »
More »